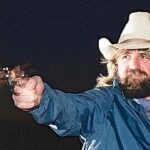 Truth be told, I have never been in a gunfight. The closest I came occurred when I was about 8 years old at my family land in South Texas. My Dad, nicknamed “Grizz”, and I were out walking when we came upon a truck that should not have been there. The man in the truck jumped out wielding a .22 rifle and pointing it in our direction. My Dad, quickly shouldered his shotgun, and quite convincingly informed the man, he needed to put his “peashooter” AWAY and LEAVE. The man, realizing he was outgunned and in the wrong place, packed up and left in a hurry (Que the Benny Hill Theme Music). Even as a young boy, it was easy for me to realize, 1) events like this happen very quickly, and 2) you must take quick and decisive action. It also helps if your Dad is an imposing “Grizzly Adams” looking fellow that yells really LOUD!

Fast forward 40 years. As a Firearms Instructor, I have been very fortunate to train with multiple industry experts that know a thing or two about gunfights. And why they all have different experiences, the information gained from them in the classroom and on the range sound eerily familiar and confirm the actions I saw that day in South Texas.

Rule 1 – Don’t Go to A Gunfight – Gunfights are chaotic and even if you are highly trained there is no guarantee that you will survive. Dave Spaulding is famous for repeating in every one of his classes, that we spend millions of dollars to train a single special forces solider, and yet they are routinely killed by enemies that have far less training. Even if you prevail, you may still be severely injured. A gunshot wound can leave you with lasting physical impairments and health problems. Avoiding a gunfight is the only sure way to win it. You should make it a practice to stay aware of your surroundings. Spotting potential threats early will give you more time to evade or escape dangerous situations. You should also avoid escalating confrontations or injecting yourself into 3rd party disputes or situations where there is not imminent threat of death or great bodily injury to yourself, your family or known innocent victims. You should also avoid interjecting yourself into theft or property crimes. These situations can not only turn deadly, but also end up costing you many times more in legal fees than the cost of the stolen items.

Rule 2 – If you find yourself in a gunfight, it is best to have a gun ON YOU – In the last Tom Givens’ class I attended, he highlighted 10 of his former student’s gun fights. All 10 happened AWAY from the home. In fact, he stated all but ONE of the 68 gunfights his former students were involved in happened at convenience stores or in parking lots or AROUND THE HOME, meaning in the driveway or yard. The sole exception was a home invasion that was part of a domestic issue. That means if you don’t have your gun on you, you probably will not have time to retrieve it from the glove box, center console or nightstand beside your bed. Read Massad Ayoob’s American Handgunner article entitled “ With A Gun to Your Head” detailing fellow Boondocks Firearms Training Academy Instructor, Larry Goldstein’s incident.

Rule 3 – If you have a gun on you, you should probably know how to get it into the fight QUICKLY – Gunfights, especially in civilian arenas, don’t typically last long. As Tom Given’s alludes to in his March 2018 Newsletter, most gunfights his students have been involved in happened at a distance of 3-7yards, typically required about 3-4 shots and were over in a matter of seconds. Tom updates these stats again in his May 2021 Newsletter and states to “put the vast majority of our effort .. on fast, reliable vital zone hits at the 3,5,and 7 yard lines” So, if it takes you more than 2 seconds to draw your gun from concealment, you probably have lost the fight. Serious defensive shooters that train A LOT are usually in the 1.0 to 1.5 seconds draw to first shot time frame. Adding about a quarter second for each follow up shot means they are getting 3 shots off in 1.5 to 2 seconds. Keep in mind, these are serious shooters who train and practice regularly and choose guns and gear that aid in their ability to draw quickly. They are “dry firing” on a regular basis and carry medium to full-sized guns in either strong side hip or appendix style holsters and dress “around the gun” in order to ensure the clothes conceal the firearm but don’t impede the draw. If you are in the habit of occasionally carrying a gun or you conceal it in pocket, purse, belly band, small of the back or ankle holster your draw will likely be MUCH slower. Take a few minutes to watch the analysis from John Correia with Active Self Protection on the White Settlement Church Shooting. It covers the importance of time to first shot.

Rule 4 – Get moving to create distance or find cover – Once you have made the decision it is time to fight, then you should also start moving. Many schools teach “shooting while moving” but that may not be the best option. In order to accurately shoot on the move, you are going to have to incorporate some type of heel/toe (moving forward), toe/heel (moving rearward) or slide step (lateral or rearward) movement in order for your upper body to remain stable enough to accurately put shots on target. If you incorporate these techniques, you will also be moving much slower than you could otherwise move. This makes you a pretty easy target, because human brains are relatively good at tracking and anticipating movement. For example, a quarterback on the football field can quickly anticipate the speed and direction of a receiver. Even while running at full speed, he can reliably deliver a football to the place the receiver will be when the ball arrives. So, while moving slowly may help accuracy on the range or in competition, it probably isn’t the best option when someone is shooting at you. What human brains are not very good at is adjusting to sudden stops while trying to anticipate this movement. The human brain (and body) has a natural tendency to remain in motion, so a sudden stop or change in direction can cause the aggressor to “over shoot” and miss. Therefore, several quick lateral steps while you draw your firearm, followed by a stop, plant and shoot, is probably better than a slow, steady “shooting on the move” option. For a quick demo on this, watch this 10 second video entitled Movement Drill with Dave Spaulding. Additionally, seeking cover from incoming rounds has proven to be even more effective than movement alone as shown in this article entitled “Stand, Move, or Seek Cover.. What Works In A Gunfight” from Greg Ellifritz of Active Response Training.

Rule 5 – Quick decisive action is paramount – When the balloon goes up, there will not be time to decide how to respond. John Hearne has a great diagram from his popular lecture series “Who Wins, Who Loses, and Why”. In it he suggests that in order to win a gun fight your actions must be grounded in a high-level of automaticity and emotional control. In addition, you will need a good level of fitness and reliable gear. We cover each topic in more detail in our 2019 Training Tip Blog called “Automaticity” Let’s look at a real-world possibility to help explain this concept. Say I am walking up to my vehicle with my head buried in my phone and unaware of the potential threat walking towards me. The first time I realize I am in trouble is when he pulls a gun and points it at me. I know from years of training and practice that I have a 1.5 second draw to first shot. However, that is not fast enough to beat someone that already has a gun pointed at me. But if the bad guy turns away from me, I know it will take at least 1.5 seconds before he can turn his attention back to me. If I move, I can probably buy an additional half second or more for him to re-address to my new location when he turns back around. Armed with this knowledge, I know (emotional control) that I have time to take a step latterly while simultaneously drawing my firearm (automaticity) and firing 2-3 shots. For me to have a chance to win this gunfight, I am going to have to draw from all of my education, training and practice, and it all has work perfectly in order for me to prevail. If you lack a plan, the knowledge, or the ability to quickly draw and fire, then you will also lack the emotional control needed to win the fight!

You may think that all of the knowledge, training and practice is overkill (pardon the pun) and that may be true, but there are also statistics that show violent criminals have more training, and practice more often, that most law enforcement officers. This FBI Study is highlighted in Greg Ellifritz’s article Training Vs. Experience and in USCCA’s Into The Fray Episode 182 and indicate the following;
• 40% of violent criminals have formal firearms training
• 80% are training or practicing every other week
• 40% have been in at least 1 gun fight
• 25% have been in 5 or more gun fights.
That is why Rule 1 is so important, if you can avoid, evade, escape, or deescalate the confrontation then you are guaranteed to win!

Posted in Training Tips
← On The Hunt: Get A GripRight To Carry 2021 →