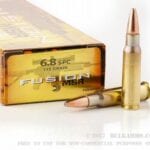 In our November 2019 newsletter, we highlighted the big 3 cartridge families including the 30-06, the .308 Win and the .375 H&H. This month we are going to focus on some mid-range munitions that either fell out of favor or never became popular, but are more than adequate for hunting and a whole lot easier on the shoulder.

The 30-30 has been putting food on the table since 1895 and is probably the most famous mid-range cartridge. No one doubts the ability of the 30-30 for deer hunting, but the 30-30 is capable of so much more. With the right ammunition, patience and proper shot placement, the 30-30 is capable of taking even the largest hoofed animals in North America. Watch how quickly this moose falls to the old 30-30. On average, the 30-30 launches 150 grain bullet at about 2,300 feet per second and generates about 1,900 foot-pounds of energy at the muzzle. It may not be super flashy or fast, but it just plain works, and is worthy of being the baseline for comparison of all the other mid-range munition options.

The 7.62 x 39 is usually associated with the AK47, but there are more and more companies offering bolt action rifles in this caliber. Ballistically it is a little shy of the 30-30 with a 154 grain bullet leaving the muzzle at 2,100 FPS and generating about 1,500 ft-lbs of energy. The 7.62×39 also spawned the .220 Russian (which was created for deer hunting in Russia), and the 6.5 Grendel. Both of these lack the bullet weight options of the 7.62×39 but still generate about 1,400 and 2,400 ft-lbs of energy at the muzzle, respectfully. While you are hard-pressed to find a .220 Russian rifle here in the US, the 6.5 Grendel is becoming a popular cartridge in the AR-15 Platform.

The 223 Remington has been around since 1957 when the Armalite Rifle Company created the AR-15. The 223 Remington is capable of launching .22 caliber bullets at speeds over 3,000 FPS and generating 1,800 ft-lbs of energy at the muzzle. That comes pretty close to the energy developed by the 30-30, but both military and hunters alike have questioned the effectiveness of the 223 on the battlefield and in the woods. In 2011, the 300 AAC Blackout arrived as an alternative to the .223. It is essentially a .223 case necked up to accept .30 caliber bullets and was designed to replicate the ballistics of the Russian 7.62×39 AK47 round in an AR platform. The 300 BO offers a whole host of bullet weight options ranging from under 100 grains to sub-sonic options over 200 grains. The most applicable to deer hunters are probably those ranging from 110 to 150 grain bullets, which equate to about 1,300 ft-lbs of energy at the muzzle.

The 6.8 SPC was developed in 2002 in an effort to address the concerns of stopping power with the .223/5.56 NATO rounds. Ironically, the 6.8 SPC is the result of necking down the 30 Remington, a cartridge originally developed to compete with the 30-30 Winchester. However, the 30 Remington never caught on, and now only lives on through its offspring, the 10 MM Auto handgun round developed by Col.Jeff Cooper, the 6.8 SPC, and more recently the .224 Valkyrie. The 6.8 SPC fires the same .277 caliber bullets like the 270 Winchester, at slightly slower velocities but with significantly less recoil. Hunting rounds for the 6.8 SPC average velocities about 2,400 FPS and about 1,600 ft-lbs of energy.

The 350 Legend is the latest entry into the mid-range munitions options. Developed by Winchester in 2019, it is basically a straight-walled .223 Remington round. This means it not only functions well in AR platforms but also meets the straight-walled hunting restrictions in many mid-west states. Therefore, manufactures are offering rifles in both Semi-auto AR platforms and bolt action options. Current 350 Legend loads are sending projectiles downrange at about 2,200 FPS with energy levels at about 1,800 ft-lbs. That is about as close to 30-30 Winchester numbers as you can get in modern rifle actions like the AR and Bolt Action platforms.

If you are fortunate enough to have 30, 40, 50 or even more years in the field, you may remember the simpler times before all the whiz-bang gadgets, guns, and gear. Before high power magnum rifles and long-range hunting was all the rage. When all you needed was a tree stump and a lever-action 30-30 to fill the freezer. You can also probably count on one hand the number of times you could of, should of, or would have taken a shot at a deer over 200 yards away. The truth is, with proper bullet selection and at ranges of 200 yards and in, any of these rounds are very capable whitetail rounds. When I talk with other hunters my age I usually hear the same themes over and over. “I am just not as mad at those deer as I used to be” or “I am really not excited about lugging all that gear to the stand or sighting in that shoulder thump-er any more.” If this is you, maybe one of these mid-range munitions might add a little more spark to your time on the range and in the stand.