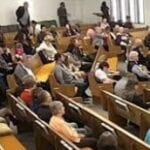 On Sunday, December 29th, a man wearing a disguise got up in the middle of communion at West Freeway Church of Christ in White Settlement, TX and open fired. Two church security team members were shot before Jack Wilson was able to return fire and kill the shooter. This comes just over 2
years after the worst mass church shooting occurred in Sutherland Springs, TX. In that incident, 26 people were killed and 20 were injured in the 7 minutes it took for neighbor Stephen Willeford, a former NRA Firearms Instructor, to run to the church and respond. In August of 2019, in an El Paso Walmart, 22 were killed in less than 6 minutes before the gunman walked back to his car and watched police arrive and turned himself into the authorities.

Fortunately for the 240 people in the West Freeway Church of Christ, Texas
changed its laws in September and now allow churches to set up their own security teams. Jack Wilson, a Firearms Instructor was the security team leader for his church, and no doubt was working to train his team for just such an event. The entire incident was captured on Live Stream video, and while it may be difficult to watch, there are a lot of lessons for other Church Security Teams.

First, and most importantly, the ability to quickly draw and get the first shot on target can not be understated. You should strive to be able to get accurate shots on target in 2 seconds or less. If everyone on the team had that ability the outcome could have been different. Second, just having a gun is not always the answer. The awareness and mindset to know how to respond in a particular situation is as important, if not more important than having a firearm. In the video, you can see that one of the security team members could have possibly taken the shooter down by rushing him and taking control of the shotgun. These points are not meant to disparage the security team members, but to offer some insight as to the importance of training. As a Church Security Team Leader myself, I know how hard it is to convince people they need training and how hard it is to get volunteers to spend the time and money to train for something that is very rare. Many politicians and anti-gun groups are also questioning the training of Church Security Teams.

After the TX Church shooting Michael Bloomberg stated, “You just do not want the average American carrying a gun in a crowded place.” What, they don’t understand is that even the “average citizens” achieve the level of training as many Law Enforcement Officers with just a few classes a year. Hopefully, the sacrifice of these brave men will serve as a reminder to all church security team members on the need to be more prepared, not only for the safety of themselves and fellow parishioners but also to prove people like Bloomberg WRONG!

If you want an in-depth analysis of this situation check out John Correia of Active Self Protection in his video analysis of the shooting.

If you want more information about Church Security and Active Shooter Training please visit our website or call 769-972-2382.

Posted in In the News
← Train With The Best!Defensive Differences! →