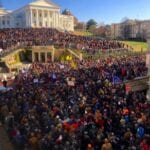 On Monday, January 16th 20,000 plus gun owners showed up at the Virginia State Capitol to protest newly filed anti-gun laws in the Virginia legislature. Despite the media’s prediction of mass riots and chaos, Twenty thousand gun owners all showed up in one place at one time and NOTHING bad happened. However, NOTHING good happened either. Don’t get me wrong, the rally was an overwhelming success. It was a well-organized peaceful gathering of law-abiding citizens protesting impending infringements on the 2nd Amendment, but that won’t stop the democratic majority from passing the anti-gun bills. You see the damage has already been done. The majority of gun owners in VA failed to show up at the polls last November and the “gun sense” lawmakers won. Since November, hundreds of cities, counties, and towns have declared themselves 2nd Amendment Sanctuaries culminating into one of the largest Pro Gun rallies on January 16th, but it probably won’t help. Just last week, the VA House shrugged off the protest and passed 7 ANTI-GUN BILLS. Oh, the massive rally may have forced the lawmakers to tweak the bills a little here and there, but they are still going to be bad bills.

In our January newsletter we offered some steps you can do to ensure what happened in Virginia doesn’t happen to the rest of the country. Those steps include becoming informed, sharing information, contributing to Pro-Gun organizations, and SHOWING UP AT THE POLLS. In his latest article, How We Win in November, Tom Gresham put it a little more bluntly then I did when he said in 2020 we must “STFU! No. Not shut up. SHOW UP!”

Now is the time to start preparing for the 2020 election. Every town for Gun Safety the anti-gun group financed by Mike Bloomberg just announced they will spend 60 Million dollars (double what they spent in 2018) to elect “gun sense” candidates. In addition, Mike Bloomberg is moving up in the polls and he has unlimited resources to put into both the Presidential Election and State elections across the country. As gun owners, we have the numbers on our side. With an estimated 100 million gun owners in the United States, we are almost double the number of voters (65 Million) who voted for Clinton in the 2016 election. If every gun owner made 2020 a single issue election (electing Pro 2A candidates) we would no longer have to settle for compromises on gun laws. There can be no more “I am pro 2nd Amendment, but….” gun owners. You must realize that there are no “Assault Weapons” or “Weapons of War” on our streets and that there isn’t a “gun violence” epidemic in the United States. It is all a false narrative push by clueless politicians, the media and anti-gun groups to keep the average gun owner on the fence. It is now time for all gun owners to get off the fence and off the couch and VOTE in 2020!