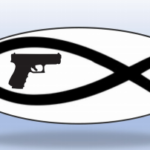 self-de·fense – the defense of one’s person or interests, especially through the use of physical force, which is permitted in certain cases as an answer to a charge of violent crime.

One of the main tenets of self-defense is avoidance. You will often hear instructors and trainers say, “the best way to win a gun fight is to avoid it”. The premise here is that anytime you confront a criminal who is armed, you have the potential to get injured or killed. Additionally, in self-defense training we don’t teach shoot to kill, we teach “shoot to stop the threat”.

sal·va·tion – preservation or deliverance from harm, ruin, or loss.

As we approach the Christmas Holiday, it might be a good time to look a little further into the moral fight! As a Christian, I believe we need to take it a step further. If you are forced to shoot to defend yourself, the criminal may also lose his or her life. There is a good bit of scripture in the Bible dealing with self-defense. As Christians, we should consider this as part of our self-defense training. One of the most prominent is found in Exodus. “If a thief is caught breaking in at night and is struck a fatal blow, the defender is not guilty of bloodshed; but if it happens after sunrise, the defender is guilty of bloodshed” Exodus 22:2-3. Clearly there are some biblical restrictions on the use of deadly force, and many believe that the difference between night and day in the scripture above equates similarly to modern day justifiable homicide laws.

In my everyday conversations with gun owners, reading online forums or browsing social media sites, I am often shocked by how many of my fellow Christians seem to be willing and eager to pull the trigger at the first opportunity. Maybe it is just bravado, but the willingness to take another person’s life over a car or other piece of property isn’t ethically, morally or legally justified in any book!
﻿

Consider this! You’re at home and you see someone outside rummaging through your storage shed. You grab your gun and attempt to stop them from stealing your stuff. As you approach, the suspect points what appears to be a gun at you, and you shoot! The police and ambulance arrive and rush the suspect to the hospital where they later die. You find out that the suspect was a 16-year-old with a BB gun. In addition to the legal ramifications, you will also have to deal with the social and emotional aftermath. The taking of someone’s life, even in a justifiable homicide, can be a very traumatic experience. The aftermath can lead to host of psychological problems including, sleep deprivation, anxiety, depression, substance abuse and more. The more you train, the more you are able to “what if” potential scenarios and better understand ALL the ramifications of a self-defense shooting.

While we are not required to turn the other cheek when someone is threatening our lives or the lives of our family or friends, we are also not immune from the consequences of acting unjustly. However, if we truly believe that every life is precious we should also take into consideration how our actions may affect the lives of other people. Even those involved in criminal activity are capable of repenting and turning their lives around. Those that choose to carry a firearm or incorporate a firearm as part of their overall protection plan should take training seriously! Those that do are often humbled by the experience. Their eyes are opened, and they are far less likely to put themselves in a situation where they are forced to use their firearm in self-defense. They are also also less likely to make a mistake that may cost them their physical and financial freedom, their own life, or the life of another human being.