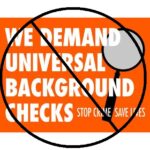 On Thursday, March 11, 2021 the U.S. House of Representatives passed 2 new gun control measures. HR 8, called “Universal Background Check” and HR 1446 “Enhanced Background Checks” While these may sound like “common sense” gun measures they can and will have an impact on the lives of Law Abiding Americans that are just trying to protect themselves and their family.

Imagine you are not currently a gun owner, but you have recently been threatened or have reason to fear someone may try to hurt you. Imagine “you are a single mom with two kids. Your house has been broken into three times in the last two months. The last burglary attempt occurred while you were in the house with your kids…and you have a bad feeling the robbers are coming back tonight to get the x-mas presents you bought for your kids.”

Read “An Interesting Experience at the Shooting Range” by Greg Ellifritz.

Now imagine that you can’t borrow a gun from a family member or friend because of HR 8 or purchase one from the Gun Store because the Federal Background Check system is down, slow, overwhelmed, or wrong and your transfer or purchase is “delayed” or “denied”. If you break the law and borrow a gun from a friend or family member without completing a background check you are now a felon, and if you are forced to defend your family you may not be able to claim self-defense because you broke the law in obtaining a firearm.

Since the start of the Pandemic in March 2020 we have seen hundreds of delayed purchases and transfers because the background check system has been overwhelmed by the millions of people buying firearms. If you get “delayed” you have to wait at least 3 days until you are able to take possession of your gun. This time frame will be pushed to 10 days if HR 1446 is passed.

Common Sense is not so Common in DC!
In August of 2019, we met with the Senior Policy Adviser for one of our Mississippi members of Congress. We toured the Boondocks facility, shot a few guns, and talked about current legislative proposals in the news. We talked specifics about how Red Flag Laws, Universal Background Checks, Magazine Capacity Restrictions and a new Assault Weapons Ban, would do nothing to stop violent crime or mass shootings and would only infringe on the ability of law-abiding citizens to be able to purchase firearms or protect themselves. They had a pretty good understanding on where the majority of Mississippians are when it comes to any new gun control legislation. However, there is a gap in the understanding between proposed new legislation and the actual impact it would have on the average gun owner. You see this “senior policy advisor ” was a mid 20’s individual who had never shot a handgun before. While you may be shocked to find out that a “Senior Policy Advisor” for 2nd Amendment issues had never fired a handgun, this is not unusual. According to this policy advisor, most of those advising lawmakers are young adults fresh out of college. The pay is low and the hours are long, so many of those with actual hands-on experience won’t take the positions. While it may be difficult for those living and working on Capitol Hill to understand the exact impact a new law will have on their constituents, the Policy Advisor made it ABUNDANTLY clear, that our law makers LISTEN TO THE PHONE CALLS from their constituents!

So let’s burn up those phone lines! If you don’t make a call to your three elected officials right now, we very well may lose on this vital issue. One phone number gets you both the Senate and the House 202-224-3121.

Posted in In the News
← FFL TransfersCarry Your “Freaking” Gun! →