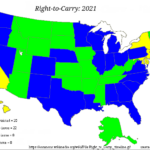 Effective July 1, 2021, there will be 20 states that will have Constitutional or “unrestricted” Right To Carry. This means that residents (an in some cases non-residents) can carry a loaded firearm concealed on their person without a permit!

SCOTUS to Hear First 2A Case in over a Decade

On Monday April 26, the Supreme Court agreed to hear the New York State Rifle & Pistol Association challenge to a law that prohibits residents from carrying a firearm outside the home without a permit. New York is one of 8 remaining “may issue” states, which means they only issue permits to citizens that can show the “actual and articulable” need for one”. ” Mere speculative or specious need for self-defense.. the desire to exercise a fundamental right.. nor living or being employed in a high crime area” is not enough to obtain a permit to carry in NY.

If SCOTUS rules in favor of NY State Pistol & Rifle Association, this may have the ability force all states to become either “Shall Issue” or “Unrestricted” Constitutional Carry States. Stay Tuned!

Earlier this year the US Concealed Carry Association jumped in to the political arena by backing the National Concealed Carry Reciprocity Act (H.R. 38) that was introduced in the U.S. House of Representatives by Congressman Richard Hudson. This appears to be the first step in a new push to become more involved in the fight over 2nd Amendment Rights. With the NRA wrapped up in turmoil and bankruptcy, this couldn’t have come at a better time. You can learn more about the ACTIONS the USCCA is taking to become one of the leaders in the firearms community.

The USCCA is a National Organization with over 550,000 members that specializes in Self-defense Education, Training and Self-defense Liability Insurance. Join the USCCA and use code BOON. Your membership includes access to hundreds of hours of Self-defense Education and Training by some of the industry top instructors, plus a subscription to the Award Winning Concealed Carry Magazine, and an insurance policy that provides the association and its members with self-defense liability insurance. Your membership is backed by a 365-Day 100% Money Back Guarantee.

Posted in In the News
← Five Rules To Help You Win A Gunfight!Summer EDC Setup →