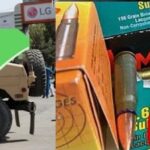 As of August 31, 2021, America’s Longest War is over. The sad and shocking events that led up to the withdrawal of our troops are only compounded by the facts that the Taliban is now armed with an arsenal of American weaponry. According to several reports, the Taliban has billions in US weapons, including Black Hawks and up to 600K rifles. The list also includes “2,000 armored vehicles… 40 aircraft, including seven brand new helicopters delivered to Kabul just a month ago”. A supply of at least “600,000 infantry weapons — including M16 assault rifles — as well as 162,000 pieces of communication equipment and 16,000 night-vision goggles, 7,035 machine guns, 4,702 Humvees, 20,040 hand grenades, 2,520 bombs and 1,394 grenade launchers.” While it is true that the weapons were not given to the Taliban (they were left to the Afghanistan military in order to fight off the Taliban), it is also true that U.S. Officials believed it would only be a matter of time before the Taliban defeated the Afghan military and gained control of both the country and the military assets left behind.

To add insult to injury, while the Taliban were reportedly using guns and ammo, paid for by American taxpayers, and carrying out door-to-door manhunt for Afghans on blacklist and confiscating weapons from Afghan civilians, The U.S. Department of State was busy announcing a new ban against Russian imported guns and ammo. Instead of trying to find additional ways to rescue U.S. Citizens and Afghan allies stranded in Kabul, our U.S. Dept. of State decided to punish Russia for the poisoning of Aleksey Navalny, by banning Russian made firearms and ammo from being imported into the United States. Why would the U.S. Dept. of State be involved in banning Russian guns and ammo, you ask? Because it is a way to back door gun control measures without having to go through Congress.

If you think this ban is truly about “Punishing Russia” and it is merely a coincidence that it was announced during the overthrow of Kabul, then read “Assault on 2nd Amendment Continues” in our July 2021 Newsletter, or Biden’s “gun safety” agenda from the 2020 campaign where he clearly states his views on limiting 2nd Amendment Rights of the American Citizens. So what does this ban mean for you and me? Here is an excellent article from Greg Ellifritz of Active Response Training on the “Five Consequences of the Russian Ammo Ban.” Number 5 on this list is “A new gun control strategy.” If the politicians can’t get the guns through the legislative process, they will try to do an end run around by going after the ammunition with “policy changes” that do not require a vote on the floor.

So while the Taliban are going door to door, confiscating guns and killing civilians that don’t conform to their religious beliefs, Joe Biden is telling us the 2nd Amendment is all about “hunting.” That “no one needs to have a weapon that can fire over 30, 40, 50, even up to 100 rounds unless you think the deer are wearing Kevlar vests or something” and “if you wanted or if you think you need to have weapons to take on the government, you need F-15s and maybe some nuclear weapons.” News Flash! The events going on in Afghanistan is exactly why the 1st and 2nd Amendments were created. When the government is in control of who and what weapons the people are allowed to have, then they are also in control of you! This should be a wake up call for all Americans. We have a very narrow window between now and the mid-term elections in which we can put a stop to these infringements, but it is going to take every gun owner out there to get involved, show up at the polls and VOTE!