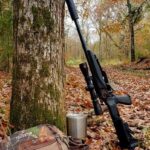 I have always liked to be a little bit different when it comes to the guns and gear I choose. As I prepare for the upcoming hunting season, my choice of firearm and caliber reflects that pretty well. This year, my go to gun (especially if one of my sons is accompanying me to the blind) is going to be a blend of a classic firearm, wrapped up in modern day esthetics, in a caliber that is easy to shoulder.

The Gun!
This year I will be primarily toting a Thompson Center Contender chambered in 6.8 SPC. While I have the traditional walnut stock, the Choate M4 Telescoping Stock makes it easy to adjust the length of pull for me or my boys. The T/C Contender is a single shot break open platform originally introduced in 1967. The unique feature was the ability to swap out barrels quickly and easily and allow owners to shoot calibers ranging from 22LR to 45-70. When I originally purchased this gun, it came with a 44 Magnum barrel, that soon I traded for a .223 Remington Super 16 barrel . This was going to be the “first deer gun” for my oldest son. A few years later I stumbled upon a barrel chambered 6.8 SPC. I purchased it and had it cut and threaded to 16″ for a suppressor. I later added the Choate Stock to current complete the current configuration.

The 6.8 SPC (Special Purpose Cartridge) was designed in the early 2000’s as a possible new military round. Developers necked down the 30 Remington case (developed in 1906 to compete with the 30/30 Winchester) from 30 caliber to 27 (.277) caliber. The goal was to offer superior downrange lethality over the 5.56 NATO/.223 Remington with a negligible increase in recoil. This was the primary reason I decided to upgrade my TC Contender from .223 to 6.8 SPC. As a side note, the 30 Remington was also used by Col. Jeff Cooper to develop the 10 MM Auto pistol cartridge (which later was shortened further to the 40 S&W case) and is also the parent case for the .224 Valkyrie round. My ammo choice for hunting is the Hornady 6.8 SPC 120 Grain SST round. The bullet is leaving the barrel at about 2,460 FPS and has 1,610 Foot lbs. of energy at the muzzle. Some have compared the 6.8 the ballistics to the classic 30/30 Winchester and the 30/30 has been filling freezers with venison since 1894.

While sighting the gun in, I was impressed with the light recoil and accuracy and the ease of transporting the handy little rifle to the stand. One afternoon, my son decided to skip the hunt and on a whim I decided to carry the 6.8 with me to the stand. At about 5:00 PM a doe stepped out into the gas line at about 175 yards. She was slightly quartering away from me when I dropped the hammer. She tucked tail and ran and I was pretty sure I heard her crash. I waited about 30 minutes before going to search for her. When I stepped into the woods where I thought I saw her run I spotted the big white belly. She had run about 30 yards before crashing. The 120 grain Hornady SST preformed well, entering just behind the left front shoulder and produced a good exit hole just in front of the opposite shoulder.

Since firing the first shots out of my (I mean my son’s) rifle I have acquired two additional 6.8 SPC options. The first was a limited edition run of the Ruger M77 Compact, and the second was an AR Platform build that I intend to start my youngest son out on this year. He is already a crack shot with his M&P 15-22 so transitioning to the AR in 6.8 SPC will be easy.

The 6.8 SPC maybe a little different, but that is why I like it. It’s legacy is derived from the early 20th century and the 30 Remington Case. A cartridge that provided a platform for greats like Col. Jeff Cooper and others to develop the 10 MM Auto, 40 S&W and .224 Valkyrie. It is readily available in what is now called a “Modern Sporting Rifle” or AR Platform, (developed in the mid 1950’s) and is both fun and easy to shoot. There is nothing magically ballistic about the 6.8, but it fills the gap between the .223 and the .243 Winchester and out to about 200 yards, it is a great little round for kids, and adults!