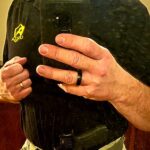 I recently made the switch from a strongside Inside the Waistband (IWB) hip holster to Appendix Inside the Waistband (AIWB) carry. I had been contemplating switching for more than a year, but as a firearms instructor I take the 4 Rules of Gun Safety very seriously. The decision to make the change did not come quickly, or easily as I was concerned about muzzling myself which violates one of the four rules. The four rules according to Col. Jeff Cooper and Gunsite are:

When you are sitting or bending over, carrying AIWB violates rule number 2, and this is what made me hesitant to switch. However, many of the instructors that I highly respect have already made the switch, and more and more students are showing up to classes with appendix carry rigs. As a firearms instructor, I also firmly believe that you need to be able to teach to the needs of the student, and since I personally didn’t have any experience with AIWB, I decided it was time to at least give it a try. The first objective was to find a “Safe, Comfortable and Quality Holster” so I went with a Keepers Concealment Cornerstone holster. Spencer Keepers is not only a friend, but an excellent instructor and his holsters are specifically designed for appendix carry. I will be honest, from a comfort standpoint the first two weeks were both physically and mentally uncomfortable. I struggled trying to find a holster that didn’t physically hurt, and every time I sat down or bent over to pick something up, the physical discomfort was a mental reminder that I was breaking a gun safety rule.

After about 2 weeks of trying to claw and wedge my way through the right combination of holster and concealment options, I found that I really began to like AIWB, especially while on the range. Not only was the draw from concealment faster (about a quarter second), but there was a lot less movement. Why is less movement important? Well, if you have ever done any force-on-force training, you will know that movement draws your eye and attention. So, if I am faced with an armed criminal and he/she turns their attention off of me, appendix carry allows me draw my firearm quicker, and have a more “surreptitious draw“. As you can see from the below videos and photos, my first shots from AWIB were about 2 – 3 tenths of a second faster, and my draw to first shot times were consistently around the 1 second mark.

While I have managed a couple of sub-second draws from strong side, my average is usually around the 1.3 second mark and it requires much more concentration and a lot more movement. There are both Pros and Cons to Appendix carry, and one of the most detailed articles appropriately called “Concealed Carry: AIWB Carry Pros And Cons” written by our friend Massad Ayoob, covers the topic well. While some may still be concerned with the direction of the muzzle I am comfortable with AWIB for everyday carry. With a quality holster that completely covers the trigger guard, modern firearms, and proper techniques for drawing and re-holstering, AIWB is not only safe, but also more efficient. Ultimately, you will need to decide if AWIB is right for you. If you are considering it, I encourage you to do your own research, and A LOT of dry fire practice.