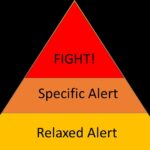 If you have spent any time in a defensive firearms class, you have probably heard of Lt. Col. Jeff Cooper and his Mental Condition / Color Codes of Awareness system. The four-color codes include White, Yellow, Orange and Red. Each of which is a level of situational awareness or readiness.

White is unaware and unprepared to take action. Yellow is a relaxed awareness or alert to who and what is around you. Orange is a heightened level or specific alert, one in which you have identified a potential threat and are preparing to take action. Red is Alarm or “Fight”, meaning you must take action to counteract the threat. However, with the explosion of the concealed carry movement and a myriad of concealed carry permit classes, the original intent of the message can become watered down over time. Add into the mix an extremely litigious society and an increasingly negative public perception of firearms and “gun violence” it is easy to see why the average permit holder may be “reluctant to press the trigger” to save their life! Take the time to watch the original here!

The recent tragedy in the West Freeway Church of Christ in Texas gives us a rare glimpse of how quickly things can unfold, and how important it is for us to be able to quickly “make the switch” from Orange to Red! According to interviews with Jack Wilson, the Church Security Team Leader who killed the shooter, the team was already aware of the potential threat. They focused a camera on him and positioned team members close by to keep an eye on him. In addition, Jack Wilson also stated he positioned himself so that he could see the shooter’s right hand. So, there was no doubt they had a specific potential threat. Once the shooter pulled the shotgun from under his coat, the team had just 3 seconds to react before the first shot rang out. That is not a lot of time to 1) realize what is happening, 2) decide how to react, and 3) implement your plan. This is why mental preparation and setting a mental trigger is so important. Watch an example of Col. Cooper’s
description of mental and physical preparation starting at about 15:30 in this video.

While the video may be difficult to watch, I encourage you to take the time to really review it. Especially if you are a permit holder or member of a church security team. The ability to set mental triggers while you are in the “Orange” or “Specific Alert” phase, can drastically reduce your response time and allow you to quickly make the switch from Orange to Red or FIGHT mode. In this particular incident, if the team had been mentally prepared to rush the shooter at the sight of a gun or had been mentally and physically prepared to draw from a seated position, they may have had enough time to prevent any loss of life.

One of the sayings you hear a good bit in the self-defense world is “Your body won’t go where your mind hasn’t been.” The process of visualization has been used for years in the sports world. Athletes will spend hours mentally preparing for a big game by watching video replays and visualizing how they will respond in a variety of scenarios; self-defenders should be no different. The moment they go from yellow to orange, they need to start setting mental triggers and deciding the best option to counter the threat. Once the decision has been made to move to RED, you must meet violence with violence and FIGHT with aggression and a determination to overcome the threat. You may get physically injured in the process, but you have to have the mental resolve to fight until the threat is stopped or you are no longer able to fight. The triangular depiction above indicates that as you move from yellow, to orange and then to red, you will need to implore a higher level of both intensity and skill. Your physical skills need to be at a level of automaticity (the ability to do things without occupying the mind with the low-level details) so that your mind can be free to focus on the best way to counteract the threat. All of this requires consistent mental and physical training.

If you need help actually training your team in Firearms, Active Shooter, Hand-to-Hand, Simulators or First Aid CPR/AED we can help!