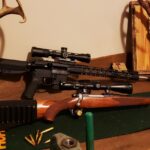 In the world of caliber and cartridges there are very few “new offerings”. Most of the popular cartridges are usually just a variation or “wildcat” version of an already established parent case.  For example, the 30-06 is the parent case for the .270 Winchester, 25-06, and .280 Remington.  The .308 Winchester is the parent case for the .243 Winchester, 7mm-08 and .260 Remington, and the 375 H&H Magnum spawned a whole host of magnum rounds. However, there are also some really great cartridges that failed to make the mainstream, so here is a list of the 5 best Whitetail Rounds You’ve Probably Never Heard Of.

The 30 Remington was developed in 1906 in an attempt to be a rimless answer to the 30-30 Winchester.  The two are almost ballistic twins, but the 30 Remington failed to gain any commercial appeal and the 30-30 went on to become one of most popular whitetail hunting cartridges ever.  However, the 30 Remington lives on in several other forms.  In 1983, Col. Jeff Cooper used the 30 Remington as the base of the 10 MM pistol cartridge and later the 40 S&W. In the early 2000’s, the 30 Remington was also used to develop the 6.8 SPC as a possible replacement for the military 5.56 NATO round. This 27-caliber necked down version of the 30 Remington pushes a 90-grain bullet at about 2,900 FPS and a 120-grain bullet at about 2,600 FPS.  The military never adopted the 6.8 SPC, but the mild recoil and the ability to utilize the round in standard AR style rifles makes it a modern day classic and the perfect youth whitetail round.  In fact, a few years after the cartridge came out, I put together a Thompson Center Contender with 6.8 SPC barrel that I had cut and threaded for a suppressor, and added AR style adjustable stock for my son.  It makes a great compact mid-range whitetail round that I still take to the stand, even if my son doesn’t go with me.  In 2017, Federal launched the .224 Valkyrie which is the .22 caliber version of the 30. Remington / 6.8 SPC.

The .244 Remington was launched in 1955, the same year as the .243 Winchester.  It is a necked down .24 caliber version of the .257 Roberts and the .28 caliber 7×57 Mauser. Remington originally intended it to be more of a varmint round with a fairly slow barrel twist rate.  The heaviest bullet it could reliably stabilize was about 90 grains, while the .243 Winchester, with its faster twist rate, could stabilize 100+ grain bullets.  Hunters looking for a true “dual purpose” varmint and whitetail round flocked to the .243.  In 1963, Remington attempted to correct this issue by speeding up the twist rate and rebranding the .244 Remington as the 6MM Remington.  My Dad’s very first deer rifle was a Remington Mohawk chambered in 6MM. One of my fondest childhood memories occurred on a very cold South Texas morning when I was about 7 years old.  I spotted a nice buck at about 120 yards and watched through the binoculars as my dad put a spectacular shot on him. The buck fell in his tracks never flinched.  My Dad went on to use that rifle for years to come, eventually I ended up with the mount and the rifle.  Even though the 6MM Remington is ballistically superior, about 100 – 200 FPS when compared to the .243, the train had already left the station and Remington wasn’t able to overcome the popularity of the .243 Winchester.

In 2007 Thompson Center Arms teamed up with Hornaday to create a short action (.308 length) 30 caliber round that would perform as well as the long action 30-06 Springfield.  The joint venture was a ballistic success!  The 30 TC could push a 150-grain projectile at 3,000 FPS and a 165 grain at 2,850 FPS, besting the velocity of the longer 30-06 with similar weight bullets.  But the 30 TC never caught on and was a commercial failure, sort of.  That same year, Hornady, in conjunction with Dennis DeMille necked down the yet to be released 30 TC, to 26 caliber and called it the 6.5 Creedmoor and caused even more internet arguments than the original 308 vs 30-06 debate.  Unfortunately, the 30 TC was DOA and only lives on through the love it or hate it 6.5 Creedmoor.

In 2006 Federal and Sako launched the .338 Federal.  It is a necked up 33 caliber version of the .308 Winchester. For decades the .338 caliber cartridges like the 338 Win Mag, 340 Weatherby Mag, 338 Rem Ultra Mag and 338 Lapua have been lauded for the power and performance, and the 338 Federal is not different.  It launches a 180-grain bullet at over 2,800 FPS. For comparison, the 338 Win Mag produces similar velocity with a 225-grain bullet as does the .308 Win with a 150-grain bullet.  So, the 338 Federal is about ballistically dead center between the 338 Win Mag and the .308 Winchester, but with MUCH less recoil than the Win Mag.  But don’t take my word for it. Famed outdoor writer Ron Spomer lauded the 338 Federal in his video entitled “Best Deer Cartridge No One Knows” I currently own a Savage chambered in 338 Federal.  Ammo is sparse unless you handload, but this would be my go-to rifle for any North American big game.

By now you are probably tired of seeing the number 6.5 when it comes to cartridges and deer hunting, but this 6.5 is probably one you haven’t heard of.   The 6.5×55 Swedish was developed across the pond and has been in production since 1894.  Today modern firearms chambered for the 6.5×55 are very capable deer, elk cartridge and even moose rounds. Hornady currently offers a 140grain SST load in 6.5×55 that is just ballistically shy of a 150 grain .308 Win load. But the ballistic coefficients (BC) of the long skinny “magic bullet” overtakes the .308 out past 200 yards. By 300 yards the 6.5×55 overtakes the 150 grain 30-06. At 500 yards the 128-year-old 6.5×55 round has just about overtaken the 150 grain 300 Win Mag.  While you are not likely to find a 6.5×55 in your local gun store, the 6.5×55 has been putting down game for more than a century, and the BC of this old round have resurrected themselves in modern day cartridges like the 6.5 CM and the PRC rounds that are now lining the shelves.

Whether you have heard of them or not, all of the cartridges listed above are perfectly capable whitetail rounds for most hunting situations.  Chances are the gun you have in your safe or take with you on your next hunt are too.  For as long as there are guns to launch bullets out a barrel, “The Timeless Caliber Debate” will continue.  My suggestion; find a gun that you are comfortable shooting and practice, A LOT.  Because, bagging that next whitetail is more about putting the bullet where it belongs than the size of the bullet going down the barrel.