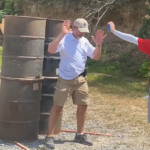 Recently I shot my first International Defensive Pistol Association (IDPA) Match with a Red Dot equipped pistol. This was not only my first match with a red dot, but the first match I have shot in about 2 years, so needless to say, I was a little bit rusty. The match was also a good reminder on how important it is to incorporate training, practice and competition into your routine, especially if you want to be better prepared to protect yourself and your family.

The match started off Ok for me. Other than a flubbed reload and some points down caused by nerves, my first stage went pretty well. With the nerves gone, my second stage was much better. No fumbles and just a couple of points down. The third stage felt awesome! Good clean reloads, a consistent pace and no points down. My fourth stage was a total mess. The stage required you to start with your back away from the targets and hands above your head. On the buzzer, you had to turn and draw to engage your targets. This was nothing new, I have done the El Prez drill before and have done plenty of turning and drawing, but this was the first time with a Red Dot Pistol. When I went to engage the first target, I could not find the dot. I thought that my dot had failed and I got flustered. It took a full 3 seconds before I was able to find the dot and shoot the first target. Then I completely botched the stage with missed shots, flat footed reloads, and procedural errors. I know for some, acquiring the red dot took a lot of practice, but I had never had that problem. From the moment I started using a red dot, the dot was always “right there” when I presented the pistol at full extension. In 2021, I took Brian Hill’s Red Dot Concept Class and picked up some tips that helped me pick up the dot a little earlier in the presentation, and what to do if I lost the dot, but none of those things helped in that moment.

After the match, I tried to decipher what happened and realized the issues came from the turning and drawing. In all the training and practice I have done with the dot, I had not tried that particular movement. The joining of the hands and the presentation of the pistol were different than when I draw and present while facing the target. If I had not shot the match, it would likely never have occurred to me this would be an issue. While shooting iron sights, I never had a problem acquiring the front sight while drawing and turning, and I assumed since I never really had a problem picking up the dot in the past, I would not have thought that drawing and turning would matter, but apparently it does.

The Importance of Training, Practice & Competition

There are millions of gun owners out there and most of them will never take a formal training class. As more and more states go to Constitution Carry, the residents simply feel the cost of good training isn’t worth the benefit. Their self-defense strategy consists of getting the carry permit (if required) and occasionally going to the range to shoot. While they may consider this practicing, they may actually be doing more harm that good.

Practice is defined as 1) the customary, habitual, or expected procedure or way of doing something and 2) perform (an activity) or exercise (a skill) repeatedly or regularly in order to improve or maintain one’s proficiency. If you have never had any training, then how do you know if what your practicing is correct?

In my eyes, you simply can’t be much cooler than my Dad “Grizz”. Growing up, we spent a lot of time shooting or “practicing” and he taught me everything he knew about hunting, firearms, shooting and reloading, but he never had any formal training. He just learned by doing. It wasn’t until my first formal training, that I realized his method of shooting was not only NOT optimal for accelerated shooting, but it could also be dangerous. In this picture his index finger is close to the cylinder gap. If you are not aware of this potential issue, take a few minutes to watch this video on “Fingers Vs. Cylinder Gap” from Jerry Miculek. So until, I actually got some formal training, all my practice was just reinforcing bad/dangerous habits I learned from my Dad. In fact, it was harder for me to break those bad habits than it was for me to learn the new skills.

Training is defined as “the action of teaching a person or animal a particular skill or type of behavior”. So while I did technically receive training from my Dad, and it did help me shoot better, it was not applicable to the skills needed in self-defense. Most of the training and practice he and I focused on was target shooting and hunting skills. We never really did any defensive or accelerated shooting, so it makes sense that if you carry a firearm for personal protection, that you should probably learn the skills you would most likely need to defend yourself. If you want to know what those skills are, then the best resource would be Tom Givens. His latest book “Concealed Carry Class: The ABCs of Self-Defense Tools and Tactics” includes statics from all of his former student’s gunfights. I highly encourage you to read his book! In it you will find that the overwhelming majority of gunfights happen at relatively close range (3-5 yards), require about 3-5 shots, and are over in about 3-5 seconds. The average person, with a little training and practice, can reasonably expect to be able to get a draw to first shot in about 2 seconds. That means you will most likely be firing 3-5 shots in 1-2 seconds! That is a shot every .3 – .4 seconds. Have you ever tried shooting that fast? Do you know if you could reliably put shots on target at that pace? In a recent blog post called “Tips To Improve Your Defensive Shooting” I cover these skills in more detail, and I even created a drill called The 357 Drill, that can help you determine your level of proficiency. If are struggling to meet the basic level of skill on this drill, you should probably seek more training.

Once you have obtained a level of “Automaticity” in your defensive shooting, then it is time to look into competition. There is a lot of debate within the shooting industry on training versus competition, but I see them both as necessary if you want to be prepared as possible. Depending on what range you practice or train on, they may not let you draw from a holster, they may limit you on the number of rounds you can shoot per second, or both! In most competitions, you will usually shoot several different stages or scenarios. You will most likely have to engage multiple targets, shoot around barricades, shoot strong or support hand only, turn and shoot (which through me for a loop this past match), shoot on the move, and more. These are things you will most likely not be able to do during practice at your local range or in a traditional training class. Plus, there is also a level of stress associated by a squad of your peers watching on as you shoot. Finally, the matches give you valuable incite on your shooting abilities. I have seen many first time match shooters, who have been “shooting guns all their life” quickly realize they may not know as much as they thought, and they may not be as competent as they imagined.

The Dunning-Kruger effect is “a cognitive bias whereby people with limited knowledge or competence in a given intellectual or social domain greatly overestimate their own knowledge or competence in that domain”. If you only practice or shoot occasionally, without having taken a formal training class, you may have developed unsafe or bad shooting habits. You may also be a victim of the Dunning-Kruger effect ( I know I was), and your shooting competence may fall into the first level (unconscious incompetence) of the four stages of competence. Which simply means, you don’t know what you don’t know! The other stages are conscious incompetence, conscious competence and finally unconscious competence, as shown below. Most of us have developed unconscious competence while driving a car. We may have first started driving in a big empty parking lot, then we moved to neighborhood streets, then driving through town and finally driving on the interstate. Each time we change locations, we probably started over in our competency level.

If you decide to take a training class or shoot a match, you will most likely move to the conscious incompetent block, which means you are aware of the skill, but are not proficient with it yet. However with proper practice and a little effort you should be able to quickly move to the conscious competency stage. If you continue to practice and train, you should be able to develop a level of automaticity and move to the unconscious competence. The past match really showed me that even though I thought my iron sight shooting skills would transfer over to all aspects of red dot shooting, I actually found myself a victim of the Dunning Krueger Effect and unconscious incompetence. It is time for some more dry fire, practice and another match.